Iain Murray: The Platform Economy Can Change the World

Today, the Competitive Enterprise Institute launches its new video about the platform economy. Platforms are an ancient way of doing business—think of matchmakers, city fairs, and town markets—that bring together two or more parties to make economic transactions. Today, digital platforms allow a far wider reach, bringing together people in a way that was unthinkable just a generation ago.

Examples of platforms include:

These transactions do not necessarily need to be monetary—people can transact using data about their habits and preferences. Thus, “social media” often takes the form of a platform that brings together people with shared interests and advertisers who want to reach those people.

It is important to recognize that these platforms did not require licensing or government regulation to assure the parties of quality—they solved that problem themselves. As the joke goes: 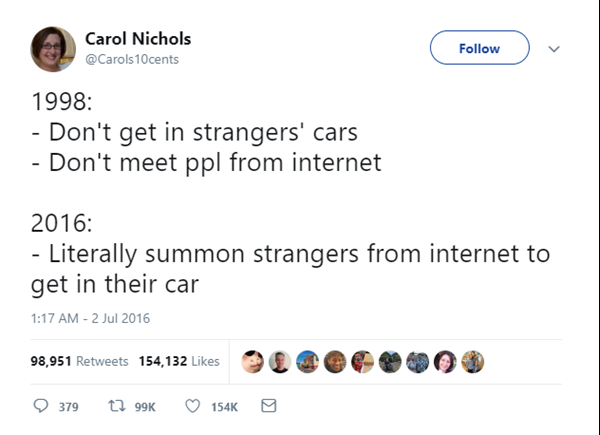 They did this through establishing their own trust system, based on reviews and ratings. Users—whether on the supply or demand side—who do not get good ratings are kicked off the platform. While abuse still occurs, these systems limit it.

Regulation Is a Transaction Cost

Another benefit of reducing transaction costs is only just beginning to be felt. Transaction costs are the main reason why we have firms. Entrepreneurs need certain tasks repeated, and so buy people’s time to ensure these tasks get done. With a flexible, skilled, reputable, on-demand workforce entrepreneurs can now get these tasks done without the overheads that come with employing people—not just the costs of government bureaucracy, but also those of internal bureaucracy. We are beginning to innovate bosses out of the picture.

This will mean that certain features of labor markets that have been the subject of great dispute and even legislation over the years will cease to be as important. Paid time off becomes less important in a world where you can more easily choose your own hours. This will also raise the salience of policy debates over things that are currently largely tied to employment such as healthcare, retirement savings, and pay-as-you-go taxation.

Platforms are changing the way we live, work, and get about. They have the potential to provide significant increases in wealth. We all use them and, in many cases, love them, so we should also defend them from needless regulation.

Murray has published several acclaimed books, including Stealing You Blind: How Government Fatcats Are Getting Rich Off of You and The Really Inconvenient Truths: Seven Environmental Catastrophes Liberals Won’t Tell You About – Because They Helped Cause Them. His op-eds have appeared in The National Review, The Providence Journal and Fox News. He has appeared on Fox News, CNN Headline News, the BBC and Al-Jazeera, among other broadcast networks.

In addition to his work at CEI, Murray is the visiting fellow at the Adam Smith Institute and board members of the Cherish Freedom Trust and American Friends of the Taxpayers Alliance and advisory board members of Global Britain and Young Britons Foundation.

This entry was posted in Cross Post, Cryptoeconomics. Bookmark the permalink.

One Response to Iain Murray: The Platform Economy Can Change the World