Down to the wire

Twenty-four hours to go and everyone’s still in with a chance. That a president without a single significant achievement in four years and many disasters is not with certainty about to be routed is incredible. What the outcome will be no one can tell you for sure but am hoping it’s this: 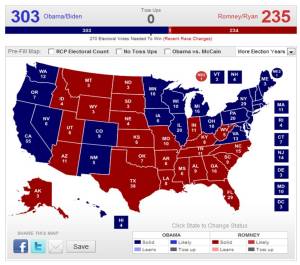 Both are realisic possibiliies built on assessments of the data. The first is a projection based on Gallup’s electorate poll and the second is from Nate Silver and The New York Times. By just past noon tomorrow we should know who will be president of the United States for the next four years.

496 Responses to Down to the wire