Watching American politics remains as depressing as ever. There are the Democrats who run as Democrats (DD), there are the Democrats who run as Republicans (DR), there are the Republicans (R) and then there’s Donald Trump (T). And running far to the left of all of these is the media (M). The configuration is thus DD+DR+M vs R+T. Maddening. And the DR types may well have preferred Hillary over Trump, and that includes Paul Ryan, the present Speaker of the House, a DR to his very bootstraps. So let us go to the tape. This is Ryan speaking in October, just a month before the election:

“His comments are not anywhere in keeping with our party’s principles and values,” Ryan said. “There are basically two things that I want to make really clear, as for myself as your Speaker. I am not going to defend Donald Trump—not now, not in the future. As you probably heard, I disinvited him from my first congressional district GOP event this weekend—a thing I do every year. And I’m not going to be campaigning with him over the next 30 days.”

“Look, you guys know I have real concerns with our nominee,” Ryan continued. “I hope you appreciate that I’m doing what I think is best for you, the members, not what’s best for me. So, I want to do what’s best for our members, and I think this is the right thing to do. I’m going to focus my time on campaigning for House Republicans. I talked to a bunch of you over the last 72 hours and here is basically my takeaway. To everyone on this call, this is going to be a turbulent month. Many of you on this call are facing tough reelections. Some of you are not. But with respect to Donald Trump, I would encourage you to do what you think is best and do what you feel you need to do. Personally, you need to decide what’s best for you. And you all know what’s best for you where you are.”

What Trump can do on his own, he is making progress but it is a shark pool at every turn. But the one area he cannot control are the issues that can only be decided by legislation, which means by Congress, which means they must pass through the hands of Paul Ryan. And this is the core issue of Obamacare, which either can be repealed or it cannot. And if it cannot be repealed, because it requires 60 votes and there are only 52 Republicans, then there may or may not be other ways to do it, which requires some kind of finessing in the way the legislation is crafted. And that is how it is being done, or so Ryan says. But among those who in my view are in the R column is Tom Cotton, Senator from Arkansas, a potential presidential nominee and very astute. Here he is talking to Hugh Hewitt.

HH: So what can be done? I’ve talked to the Speaker, I’ve got to the Leader. I’ve talked to Cathy McMorris Rodgers is on today, Mick Mulvaney, Tom Price. They all say it’s a three-step dance because of the Senate reconciliation rule. So you know those rules. Working within the rules, how can the Senate improve its bill, or how can the House send to the Senate a bill that fits within the guardrails of reconciliation and allows for 51 votes that improves the individual market?

TC: Hugh, there is no three-phase process. There is no three-step plan. That is just political talk. It’s just politicians engaging in spin. This is why. Step one is a bill that can pass with 51 votes in the Senate. That’s what we’re working on right now. Step two, as yet unwritten regulations by Tom Price, which is going to be subject to court challenge, and therefore, perhaps the whims of the most liberal judge in America. But step three, some mythical legislation in the future that is going to garner Democratic support and help us get over 60 votes in the Senate. If we had those Democratic votes, we wouldn’t need three steps. We would just be doing that right now on this legislation altogether. That’s why it’s so important that we get this legislation right, because there is no step three. And step two is not completely under our control.

Meanwhile the drumbeat of left opposition continues with anything and everything that can be thrown into the vat included, however preposterous it may be. To which is added the often sensible but still negative criticisms from those who support Trump in general but disagree on various particulars. Three years and nine months till the next election, but those years do go by quickly.

UPDATE: What continues to amaze me is how little assistance the right side of the political divide offer to Trump. I don’t say that there should be blind allegiance, but I do say there should be at least some awareness of how hard it is to push a conservative agenda in this day and age. There is endless opposition from almost 50% of the population who are socialists of one kind or another, either through personal conviction or because it raises their personal incomes to much higher levels than they would otherwise reach. And in that latter group, there are the oceans of welfare recipients on one side and the crony capitalists on the other. They present a formidable phalanx and are almost immovably difficult to deal with. Trump has both the mentality and the will to overcome much of this but he cannot do it by himself alone. The #NeverTrump is now more than supplemented by the @WishyWashyTrump, who are ready to criticise from the very moment an issue comes up. The benefit of the doubt is never towards seeing what Trump is trying to do with the limited resources available in the midst of a public service that is largely and implacably opposed to his agenda. I need hardly add that not everything can be done at once and many things that Trump may wish to do might in the fullness of time turn out to be impossible to carry out. But that he is trying to achieve my agenda is never in doubt, and that he miraculously prevented a Hillary administration will always mean we were given at least this one last chance before the deluge.

Michael Savage, along with Rush Limbaugh, are two who do get it. Savage has just published a book – Trump’s War: His Battle for America – that spells out the dangers of a fairmindedness that borders on the inane. 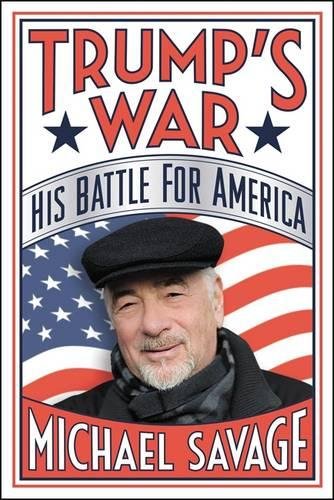 This is a battle that is for keeps. If we lose it, we don’t get to come back next season and have another go.