The Office for National Statistics has just released its annual publication, Adult Smoking Habits in Great Britain, with data for 2017.

2017 was the year that plain packaging and the Tobacco Products Directive effectively began. Both were introduced in May 2016 but retailers were allowed to sell their old stock until 20 May 2017. The tobacco industry made sure plenty of branded packs were available and few smokers saw a plain pack until 2017. The vaping industry also tried to make sure there were good, non-EU regulated e-cigarette fluids available for as long as possible.

Now that the British and EU governments have saved us from the perils of branded cigarette packs, packs of ten and high strength vape juice, the rate must have fallen still further, right?

Wrong. As I mentioned in May, the data from the Smoking Toolkit Study show the smoking rate inching up in 2017. This has now been confirmed by the Office for National Statistics, which reports that smoking prevalence has gone up to 16.8%, the first rise in six years. 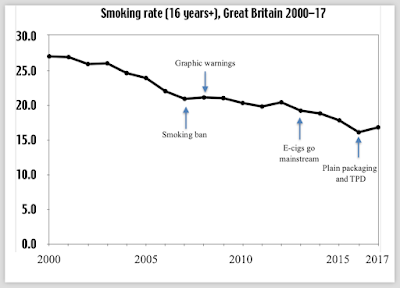 The Tobacco Products Directive makes the most popular substitute for smoking less appealing. Plain packaging makes smokers more likely to buy tobacco on price rather than on brand, and if they want a branded pack they have to buy on the black market where cigarettes are cheaper. Banning packs of ten and small tobacco pouches means that smokers have to buy more tobacco than they might intend.

It doesn’t take a genius to work out that this isn’t going to reduce the smoking rate and yet the ‘public health’ lobby spent years – and vast sums of taxpayers’ money – lobbying for these idiotic regulations. It was revealed this week that the Australian government spent $39 million on plain packaging. In Britain, hundreds of thousands of pounds were spent on billboards advertising this ridiculous policy. Their slogan used takes on a new meaning now that plain packaging has proven a damp squib in Britain, France and Australia.

The campaigners have already moved on. Banning smoking in the home, censoring television programmes, changing the colour of cigarettes… It goes on and on, without end and to no end.

Will anyone be held accountable? Of course not. The whirlwind of destruction will continue because it makes politicians feel good. Intentions are everything. Outcomes are irrelevant.

The NHS has chosen today to release its Statistics on Smoking report which is based on the Annual Population Survey and reports a decline from 15.8% to 15.1%. This is a survey of people aged 18 and over whereas the figures above, based on the Opinion and Lifestyles Survey, covers people aged 16 and over. You pays your money and takes your choice, but I have always used the 16+ figures which, incidentally, are closer to the figures that are taken every month in the Smoking Toolkit Study and also show a slight rise in 2017 (see below): 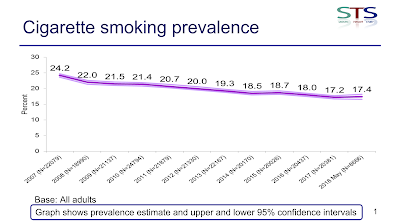 This entry was posted in Cross Post, Plain Packaging. Bookmark the permalink.