Australians once enjoyed affordable power, reliably delivered: the chaotic delivery of wind and solar changed all that. Australian power prices have rocketed out-of-control: its wind and solar power capital, South Australia pays the highest electricity prices, in the world.

Mass power cuts (aka load shedding and demand management) and mass blackouts are the new normal. And yet, the lunatics responsible are hell-bent on doubling down to deliver the final and fatal blow to Australia’s Eastern Grid (geographically, the largest interconnected power grid on the planet).

As Jo Nova explains, electricity generation and delivery is a finely balanced thing; and the sudden massive surges and collapses that are part and parcel of wind and solar generation are taking their toll, with much worse to come.

Ayn Rand didn’t write The Return of The Primitive as a how-to guide.

Plus this from the comments thread among many that discuss Australia including an almost hour long video of Jo Nova herself.

Here’s a map of Australia’s shale gas formations, which are comparable in size to U.S. shale reserves. It’s not a matter of there not being an alternative answer, it’s just a matter of the politicians there to stop buying into the idea that freezing is better than fracking…. 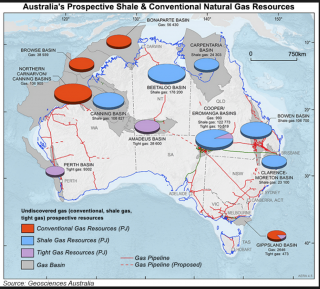 Along with this, via Powerline.

16 Responses to Look! Australia is now setting the international standard for green idiocy