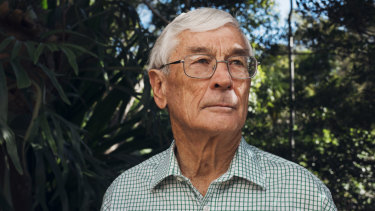 Here’s the thing, Dick: if you want to make a point, it’s worth doing some homework.

Now good luck to Dick for his $500,000 tax refund.  He no doubt has one of the few very large legacy superannuation funds, with most of the balance paying 15 per cent tax after the $1.6 million cap was imposed.

There are a handful of these funds still around – with over $100 million – which were often the result of the trustees selling a business very profitably.  This is likely the case with Dick Smith. (We won’t go into what eventually happened to that business.)

But as the trustees die off – I’m assuming that Dick wouldn’t dream of having his children as trustees as well – these large self-managed superannuation funds will disappear.

Returning to the real world, with the caps on both concessional and non-concessional contributions being so low, in the future not many individuals will even reach the $1.6 million cap, so the Dick Smith ‘problem’ will simply not exist.

As to returning the money to the taxman/government, it is probably true that there is currently no provision because it wouldn’t be used enough times to justify. But I am sure that Cats have some good thoughts about what he could do with his half a million bucks.

As for the Labor Party, I would be ignoring the Dick.  The vast majority of cash refunds for franking credits are under $10,000 per year.  (The median is less than $5000.) If Labor were to exempt them, there would be no billions and billions to fund free stuff for their mates.

There is another myth being peddled by the progressive press and that is the flow of cash refunds for franking credits is unsustainable.  This is a complete misunderstanding of how dividend imputation works.  The value of the franking credits is captured one way or another (foreign shareholders apart).  It’s neither here nor there whether they are captured by taxpayers or non-taxpayers.

If the Nine Entertainment media want to get rid of dividend imputation, then it should be upfront.  I can’t see Labor taking up the recommendation.

Millionaire Australian businessman Dick Smith received $500,000 in franking credits from the government in a single year, in what he called an “outrageous” use of taxpayers’ money that should be subject to a means test.

As the Labor opposition awaits a wide-ranging review of its election loss, MPs are divided on whether to scrap the policy of abolishing franking credits, grandfather the scheme or exempt those receiving modest amounts.

The entrepreneur said he had no idea what franking credits were before discovering the payments, and complained to the Australian Tax Office.

“I found I was getting this ridiculous money from the government,” Mr Smith told The Sydney Morning Herald and The Age.

“That’s wrong, I said – I’m wealthy. My accountant said ‘that’s how it works, that’s what you have to do’. I can’t stop it. I think it’s outrageous for wealthy people to be getting money from the government.”

Dividend imputation – which is common globally – provides a dividend recipient with a tax credit for tax that has already been paid by the company producing the dividend. This is to avoid double taxation on the same amount of money.

Changes introduced by John Howard and Peter Costello provided cash back to people who paid no income tax but still received dividends from their portfolios. This was the unusual quirk Labor had planned to abolish.

Mr Smith said Labor should have applied a means test to its policy to ensure that only rich Australians lost the entitlement. As previously reported, Labor considered doing this but decided against it because it would have robbed the party of billions in potential revenue.

The Coalition ruthlessly targeted Labor over the policy – branding it a “retiree tax” – before and during the election campaign, and many Labor figures have conceded it played a role in the party’s unexpected defeat in May 18.

Liberal backbencher Tim Wilson conducted a series of public inquiries around the country which heard from upset retirees who made modest financial gains from their cash refunds but relied on the annual payments.

“Labor sold the whole thing incompetently,” Mr Smith said on Tuesday. “They should have put a threshold on it, so wealthy people like me would pay the tax, but pensioners and less well-off people would not meet that threshold.”

When Mr Smith complained about the cash refunds to the ATO in 2017, he received a reply from commissioner Chris Jordan, who promised to look into the businessman’s “unusual request” to pay more tax.

“It’s not every day I get such a request – in fact I can’t think of any day I have been asked that question,” Mr Jordan wrote.

Mr Murrell said Mr Smith had a “classic superannuation fund” and the annual tax refunds he received would be in line with other high net worth Australians.

“Every individual of Dick’s standing would have a similar fund, I would assume,” Mr Murrell said.

Abolishing franking credits would have saved a Labor government $5.6 billion in year one, growing to $8 billion a year, which it could have used to fund other priorities.

Labor MPs broadly fall into two camps: those who want to junk the policy entirely and those who say it should be retained but grandfathered or capped.

Labor MP Ed Husic said the internal review must run its course but warned: “At some point the public is going to question whether we can continue to let this scheme grow at the rate that it is when we have a government quibbling about whether you can afford to properly adjust deeming rates for pensioners.”

Grandfathering the scheme would retain people’s existing benefits but block it for future retirees. This would deny Labor a serious chunk of funding for other priorities.

A cap of $5000 to $10,000 would exempt a large number of shareholders. The Australian Council of Social Services says a rule of thumb indicates a person receiving $10,000 a year in refundable franking credits would generally hold about $500,000 in shares.

Opposition Leader Anthony Albanese and shadow treasurer Jim Chalmers have said Labor’s policies are all up for review and they will not take an identical agenda to the next election.