What exactly is to be done?

Here’s the challenge, but where’s the plan? Let’s stand up to globalist cant. There we find written:

Journalist Sebastian Haffner, writing on Hitler’s rise in Germany, refers to the ­absence of conservative resistance: “They went along with everything: the terror, the persecution of Jews … They were not even bothered when their own party was banned and their own members arrested.” ­Alexander the Great similarly ­observed that the people of Asia were slaves because they had not learned the word “no”.

I do not believe this is even remotely true, that conservatives “went along with everything: the terror, the persecution of Jews … they were not even bothered when their own party was banned and their own members arrested.” I bet they were bothered quite a lot, possibly even alarmed and frightened and would have refused to go along with any of it had there been any actual choice. Tell me what they should have done?

It is almost certainly the case that the tanks have so far been kept out of Hong Kong only because of the presence of Donald Trump in the White House. The most interesting aspect of the present moment in our political history is to find that, as has occurred over and again in the past, the left have declared war on the established rules that we “conservatives” count on to preserve our way of life and wellbeing.

So what’s the plan? What should we be doing exactly that we are not doing already? What should Donald Trump be doing?

Look at these ignorant yokels sitting on the streets of Melbourne. What exactly do you intend to do to get their attention. How are you going to get them to see how inane their concerns are?

Smiling and cheerful. A lark and a day in the park. How about this for a contrast. 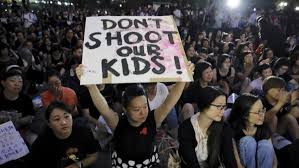 Are we there yet? Where are we exactly? As Lenin himself asked at a different time and in a different place: What is to be done? There’s plenty of caution to go around but it’s all very well to rabble rouse those of us who leave things to our democratic institutions. We voted in Tony Abbott and Donald Trump and both uncovered a very deep institutional state of very dangerous people who will do anything to overturn the will of the people which does not coincide with the will of the “elites”, morally worthless scum though they be. And then there’s Boris as well so we are not without forces of our own.

I will tell you what the only plan we have is. To continue arguing our case in public, and to hope that we can get at least half the population to understand the dangers “climate change” and “socialism” and all the rest of it have for themselves and for their own futures.

If I have told this story before, well here it is again. I taught something like 1500 students over the years and I used to say when I came to my History of Economics section that I would give an automatic “A” to anyone who could tell me a single historical fact about John Stuart Mill. And no one ever did. Look at those dimwits in the street. They are not only your future, they are their own future. If you’re not worried you should be.

This entry was posted in Conservative politics. Bookmark the permalink.

91 Responses to What exactly is to be done?