Jo Nova on trouble in the solar paradise and megafires. And Don Aitkin

Maybe there is some justice in the world after all. Solar no longer a licence to steal money.

Almost all the research and info in this came from Allan O’Neill at WattClarity. In a nutshell, solar isn’t profitable even in Queesland because the lines are long, transmission loses are large, the electricity comes when customers don’t need it, and the government keeps insisting the solar farms pay for “grid stability” (FCAS) because the grid needs it, and solar doesn’t supply it.

And bitter truths about the big bushfires. This brings to mind a story told very briefly in the chapter on forest management in the book that reviewed Green policies some years ago. 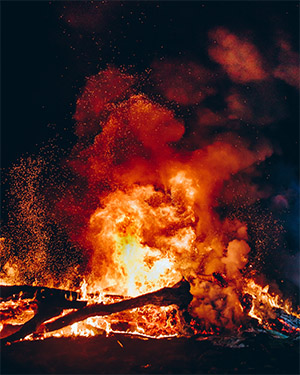 Hardly anyone is talking about these numbers yet they show just how far beyond our control the pyroconvective firestorms are and why we need to be so much smarter at preventing them. They also show how irrelevant temperatures onsite are, compared to fuel load and wind speed.

Controllable fires are 3MW per meter, but we now have loads of 70MW/m

Not only are these fires obscenely, catastrophically intense, it doesn’t matter how much fire fighting equipment we buy, how many dams we empty, they are a man-made disaster, and we’ve known for years how to prevent them. (Some would say, thousands of years). The message in here is that cool controllable burns are tiny, less damaging, and far less intense. The pyroconvective monsters are totally different creatures.

Re Paul Kelly who got a mention in the comments, a typical scientific illiterate. He got caned in the comments because the people who comment there are much like Cat readers in their understanding and opinions.

Don Aitkin, national treasure, writes his last post on climate matters for a while.

I knew Bob Carter well, because he had been an outspoken (and highly successful) scientist who had served on the Australian Research Grants Committee when I was its chair. He got me to read other articles, from both sides of the domain. I became increasingly more sceptical myself. The data were rubbery, the arguments too confident. The media loved the scary stories, which encouraged more and more assertions. In 2008 I gave a public presentation of my views to the Royal Australian Institute of Planning, of which I was an honorary Fellow, and that led to my becoming a public figure in the debate.

You have done great harm to humanity and Australia, in the service of your own self-conceit. As the country burns, you should consider whether you want to salvage your reputation while you still have time.

27 Responses to Jo Nova on trouble in the solar paradise and megafires. And Don Aitkin