The mystery of Titania McGrath

Titania McGrath is the name of a parody twitter account hosted by one Andrew Doyle, as discussed by me here at Quadrant Online: Titania McGrath, Meet George Orwell which is itself a discussion of an interview with Doyle. At one level, the account is just as it is described:

Titania, an imaginary amalgam of all the worst excesses in the modern social justice movement, fancies herself a voice for minorities of all kinds (whether they know they agree with her or not). What she lacks in self-awareness, she makes up for in conviction.

Doyle is therefore a man on the right making fun of people on the left. Well, not so fast. This, however, is how he describes himself.

I think if you were to write down all of my political views on various things I would come out more left-wing than right.

So he is then a man of the left who makes fun of people on the left who go too far. Maybe, but he also says this about himself as well.

I’d say I’m quite culturally conservative, however. I believe in high standards of education, because I think that adult autonomy depends on effective socialization in youth. So you need to have a rigorous school system, and children need to have an awareness of the classics and be taught the classics. I think art history, for instance, should be embedded at a primary-school level: not “let’s see what you can create with these paints”; I think you need to learn the classics. That’s a more traditionally right-wing viewpoint. I also believe in politeness, and decorum, and high standards and that kind of thing, which I think might be more associated with the Right.

There’s no “might be” about it. If that’s what you believe, then you are one of us and not one of them.

But then let me look at this, which is the example of a Titania tweet put up at QoL. 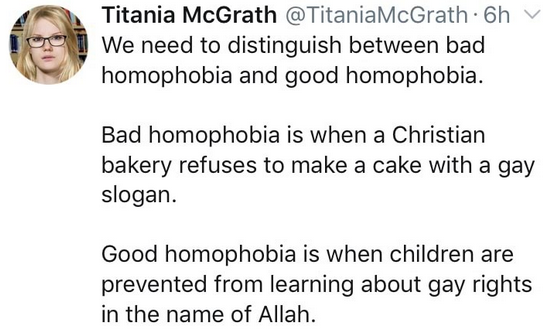 That is funny, but which side is Andrew Doyle actually on? It may well be that he believes that both are bad, that the point he is trying to make is that it is just as wrong for a baker not to bake the cake as it is to prevent children from learning about gay rights. The tweet may really be saying, a plague on both your houses.

But no matter how you slice it, Titania is a creation of genius. So perhaps we should just take his final advice:

I think the Left and Right should agree on the basic liberal principles of free expression, free discourse, and free thought. But also we need a shared social contract of how we address each other and how we tackle these issues. It doesn’t work if one side of the debate is just screaming and covering their ears. Nothing can be achieved that way.

I’m all in with that, but how realistic is it? In regard to the screaming and covering of ears, let me draw your attention to this post put up today: REBELLION IN THE KNITTING COMMUNITY. It’s about a woman who in the past had associated with Democrats only but went to a Trump rally the other day in New Hampshire. First there is what she was told by before she went:

In chatting with the folks at the [MSNBC] taping, I casually said that I was thinking about going over to the Trump rally. The first reaction they had was a genuine fear for my safety. I had never seen people I didn’t know so passionately urge me to avoid all those people. One woman told me that those people were the lowest of the low. Another man told me that he had gone to one of Trump’s rallies in the past and had been the target of harassment by large muscle-bound men. Another woman offered me her pepper spray. I assured them all that I thought I would be fine and that I would get the heck out of dodge if I got nervous.

A kind of over-the-top Titania-like reaction. But then she went along to the rally and found this:

As I waited, I chatted with the folks around me. And contrary to all the fears expressed, they were so nice. I was not harassed or intimidated, and I was never in fear of my safety even for a moment. These were average, everyday people. They were veterans, schoolteachers, and small business owners who had come from all over the place for the thrill of attending this rally. They were upbeat and excited. In chatting, I even let it slip that I was a Democrat. The reaction: “Good for you! Welcome!”

“The right” are just normal people. It is the left who are doing the screaming and covering their ears. Doyle knows that as well as anyone. Seriously, which side is he really on? Surely he is not really, as he describes himself, more left-wing than right.

53 Responses to The mystery of Titania McGrath