The aim is to steal the election

Here’s the short version from Drudge.

Pollster Predicts Big Trump Victory on Nov 3...
But Biden Will End Up Winning a Week Later!

Here’s the long version from Ace of Spades: 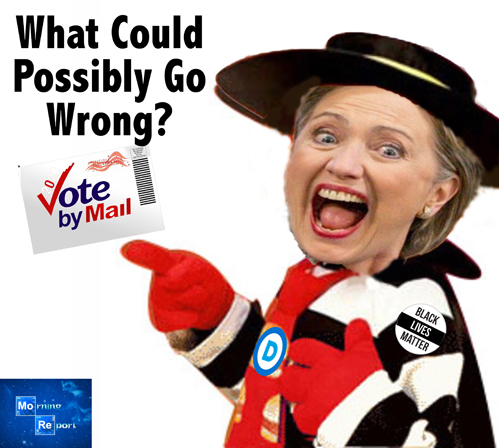 Good morning kids. Midweek and up front, more and harder evidence of the plot to steal the 2020 election by the Democrats via the Mail-In Voting scheme is coming into sharper focus. Even the media propagandists and others are starting to admit that my recent perception that Trump may be heading for the closest thing to a landslide victory since ’84 or ’88 is accurate, they are using that as merely the springboard to state that when the mail-in votes are tabulated, it will be as if the win was an illusion, or some such bilge.

Hawkfish — a “data analytics agency founded by Michael Bloomberg to support Democratic candidates” per Axios, contends that President Trump will likely win an “incredible victory” with the Electoral College on election night.However, Mendelsohn continues, “…when every legitimate vote is tallied and we get to that final day, which will be someday after Election Day, it will in fact show that what happened on election night was exactly that, a mirage. It looked like Donald Trump was in the lead and he fundamentally was not when every ballot gets counted…”

The scenario is eerily similar to [UKIP’s Nigel] Farage’s forewarning of how “dark art operatives in the Democrats” are intent on “abusing” mail-in ballots to secure a victory for Biden. Farage noted President Trump would “absolutely” win the Electoral College but warned of Democrats weaponizing mail-in ballots in the following days:

“On the day, he’ll win the vote. My worry, and you just touched on it, is this early mail-in voting. I’ve seen postal voting, the British equivalent of this, abused wholesale in the United Kingdom to the advantage of the left. The worst scenario of all is on the morning of the fourth of November, Trump looks like the winner, and then over the course of the next ten days, all these mail-in votes are counted and the result gets reversed.”

Of course, the ballots will no doubt be the result of harvesting, stealing, forgery or whatever else the Dems pull out of the back of Al Franken’s ’76 LeSabre trunk. It all depends on who is counting the votes and/or determining their validity. I have no idea what the process is for this, but if you remember the “hanging chad” madness that dragged on forever, that only involved the hand counting of ballots from, if I remember correctly, a single county, Palm Beach County (maybe one other?). We’re talking about a national election this time. Ho. Lee. Fook.

Plus this from Instapundit.

I SPOTTED THAT TOO. IT’S TIME WE CLEANED UP A VOTING PROCESS THAT WOULD SHAME A THIRD WORLD BANANA REPUBLIC:  The Democrats Explain Their Voter Fraud Plans.

Vote on the day only, with ID. Have to be registered a month in advance, with a verified address. And your finger will get stained in purple dye. The end. Anything else, and you’re risking the dilution of the vote of legitimate citizens.  Who, quite frankly, have had about enough. Or at least I have.

And this from Powerline: THE DEMOCRATS EXPLAIN THEIR VOTER FRAUD PLANS.

Seriously, is this doable? Everyone seems to know but no one can stop it? We will have to wait till the 11th of November to find out.

40 Responses to The aim is to steal the election