Liar Dan and the fine art of casuistry

This is the front page of the Oz: Andrews letters: PM’s offers met by silence. And then see precisely what Silent Dan says:

Revelations of the Prime Minister’s offers of help to Mr And­rews came as the Premier said on Wednesday that he stood by his statement to a state parliamentary committee hearing last month that it was “fundamentally incorrect to assert that there was hundreds of ADF staff on offer and somehow someone said no”.

Get it. No one said no. What a disgusting weasel. Responsible for hundreds of deaths and he wants to start defending himself by parsing the meaning of words. Will accept no responsibility for the catastrophe he has overseen and largely caused by his incompetence.

As for casuistry, perhaps he learned it when studying the classics, one of the fine arts of dishonest politics:

the use of clever but unsound reasoning, especially in relation to moral questions; sophistry.
“the minister is engaging in nothing more or less than casuistry”

I wonder if he was crossing his fingers when he said what he said. I also notice that on the new citizenship test there is this question:

Should people’s freedom of speech and freedom of expression be respected in Australia?

I wonder how Dan would go with that.

LET ME ALSO ADD THIS: Despite 10,000 new cases a day, the French are embracing life – not imposing new rules. 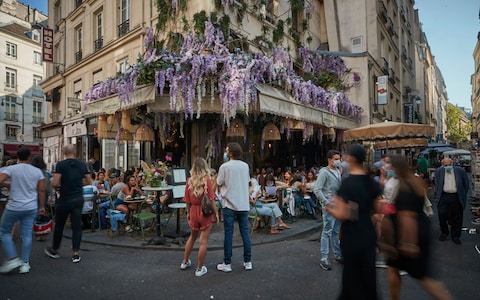 No one is dying from the Covid any longer. The contrast between Melbourne and Paris is incredible. This is Melbourne, and note the masks in both photos. This entry was posted in COVID-19, Politics of the Left. Bookmark the permalink.

28 Responses to Liar Dan and the fine art of casuistry