The Oz is the New York Times of Australia

For myself, there is no insult I could make that is greater than that, but so it seems. Having discussed here  just this morning how bizarrely anti-Trump The Australian is, I now come across this from The NYT. A series of vague general statements with a complete absence of policy issues over which they might prefer Joe Biden instead.

Mr. Trump’s ruinous tenure already has gravely damaged the United States at home and around the world. He has abused the power of his office and denied the legitimacy of his political opponents, shattering the norms that have bound the nation together for generations. He has subsumed the public interest to the profitability of his business and political interests. He has shown a breathtaking disregard for the lives and liberties of Americans. He is a man unworthy of the office he holds.

The editorial board does not lightly indict a duly elected president. During Mr. Trump’s term, we have called out his racism and his xenophobia. We have critiqued his vandalism of the postwar consensus, a system of alliances and relationships around the globe that cost a great many lives to establish and maintain. We have, again and again, deplored his divisive rhetoric and his malicious attacks on fellow Americans. Yet when the Senate refused to convict the president for obvious abuses of power and obstruction, we counseled his political opponents to focus their outrage on defeating him at the ballot box.

Nov. 3 can be a turning point. This is an election about the country’s future, and what path its citizens wish to choose.

The newspaper of broken-record disseminates the lies for every shallow nitwit across the world to repeat ad nauseum. Let me just return to the comments section on Van Onselen,  and pluck just this from the hundreds of criticisms of his sophisms listed according to “Best”. This is from “Spud”; obviously from his aristocratic name a well-known and highly regarded non-deplorable:

“Trump’s poor performance”
He’s led the US into no new wars
He’s routed ISIS (remember them?)
He’s rebuilt the US military (you know, the military we depend upon)
He’s stood up against China’s rapacious trade policies
He’s forced NATO countries to front up more for their own defence
He’s relocated the US embassy in Israel to Jerusalem (long promised, never delivered until Trump) and recognised the Golan heights as being part of Israel (a must-have for Israel’s defence)
He’s brokered peace deals between Israel and the United Arab Emirates and Bahrain (Nobel Peace Prize 2021?)
He’s curbed illegal immigration, including with a wall (OK, the Mexicans didn’t pay for it)
He’s replaced NAFTA with an improved trade deal with Mexico and Canada
He reduced regulations and taxes, producing US energy independence and, before COVID hit, the lowest Black and Hispanic unemployment on record; combined with an upsurge in real wage growth
He’s brought back manufacturing jobs when Obama and those in the know said it couldn’t be done
He’s promoted and signed the First Step Act to lessen the over-incarceration of black offenders
He’s established business opportunity zones in the inner cities to help minorities escape despair
He’s supported school choice and charter schools for disadvantaged children
He’s promoted and signed a bill to provide permanent funding for traditionally black colleges.
He’s appointed objective federal judges and Supreme Court justices to defend the constitution, as distinct from politically motivated activists.

It turns my stomach how straight-out ignorant our supposedly educated class actually is. Please bear this in mind next time you come across an editorial from The NYT. 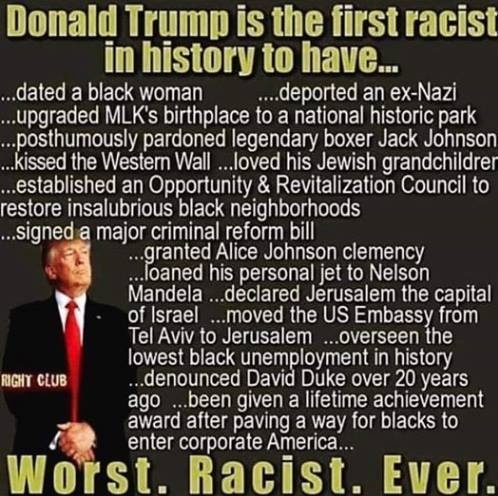