Statistical proof of election fraud in the US

Picked this up in a comments thread at Powerline here. Commenter  vbmoneyspender whose comment is around fifty down if you start with the list set at “Best”. You can also find Benford’s Law discussed at Wikipedia. This was the comment, slightly edited:

For people who are wondering how it is possible to tell when vote counting is fraudulent here is one way. Using Benford’s law, one can tell whether the distribution of numbers from, for example, precinct candidate vote-total reports are random or fraudulent in nature. The way Benford’s law works is you take a bunch of numbers, for example deposit amounts that a business has recorded over the course of year, and for each of those amounts you record the first digit of the deposit.

So if a deposit on a particular day was in the amount of $1,234.56, you would record the ‘1’. You then do that for every other number in your dataset and Benford’s law holds that if the deposit amounts are truly random, the number ‘1’ will be most common, followed by ‘2’ and then ‘3’ and so on with ‘9’ being the least likely.

You’ll then be able to plot this on a graph so there is a sloping curve to the dataset. On the other hand, if the dataset has fraudulent numbers, you’ll end up with weird results like the number ‘4’ being most common or the number ‘8’.

The IRS uses this mathematical law to detect fraud in tax returns and/or the supporting documents that are filed with them, as well as by accounting firms that are auditing their clients’ books and records.

Take a gander below at what Biden’s vote counts look like in Chicago and Milwaukee and Allegheny, PA. I think the results speak for themselves, but suffice it to say, all the candidates vote counts look normal except for Biden’s: 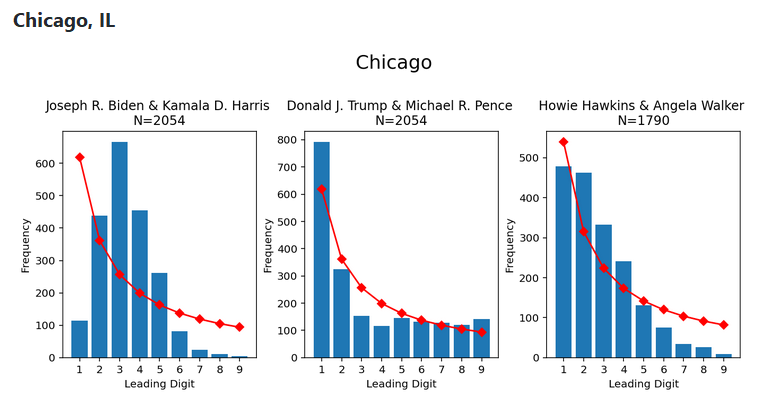 Of course, even beyond these stats, which is truly astounding, there is this: If No Fraud Is Happening, Why Not Let the Trump Campaign Watch the Counting? It’s Rush Limbaugh:

Okay. So why are the Democrats in Philadelphia fighting it? I mean, if there’s no cheating going on, if everything’s aboveboard and if Trump’s gonna lose and he’s gonna lose legitimately and you just better get your arms around it, why not let the Republicans in and let them see Trump losing legitimately? Why are they afraid of this?

What is more incredible is who is in this fight and who’s not. The integrity of an election you would think would matter, really matter, to everyone and especially on the Republican side. This is a pivotal moment in the West. You would think more people would care.

There is also this which is worth a read:  A Matter of Probabilities.

127 Responses to Statistical proof of election fraud in the US