How do people take such incompetent and dishonest morons seriously? 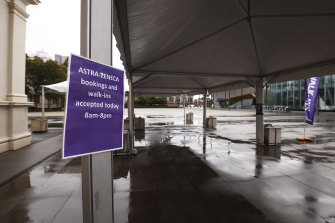 They bugger everything up but here we are: Merlino takes swipe at national vaccine rollout.

The figures come as Victorian Acting Premier James Merlino again took a swipe at the Commonwealth’s delayed vaccine rollout on Monday morning, saying Australia is falling behind the world.

“In terms of where we are right now, we are well behind where we need to be,” he said. “So, when you compare how Australia is going with the rest of the world, we are falling so far behind it’s not funny.”

And just what figures were they?

Victoria has recorded one new local coronavirus case in the past day, as the nation’s leaders meet to discuss the troubled vaccination rollout.

Eight new cases were recorded in hotel quarantine. More than 16,000 test results were processed in the past 24 hours and more than 10,900 people received their vaccine doses.

Oh the figures in question refer to the all-but-non-existent pandemic.

Meanwhile, in the US, Ivermectin has crossed an important threshold in that it has shown up today in Instapundit. You never know. The word might eventually get out even to our own Ministers of Health and Chief Medical Officers who always seem to be the last to know.

QUESTION ASKED: Why Has “Ivermectin” Become a Dirty Word?

On December 8, 2020, when most of America was consumed with what The Guardian called Donald Trump’s “desperate, mendacious, frenzied and sometimes farcical” attempt to remain president, the Senate’s Homeland Security and Governmental Affairs Committee held a hearing on the “Medical Response to Covid-19.” One of the witnesses, a pulmonologist named Dr. Pierre Kory, insisted he had great news.

“We have a solution to this crisis,” he said unequivocally. “There is a drug that is proving to have a miraculous impact.”

Kory was referring to an FDA-approved medicine called ivermectin. A genuine wonder drug in other realms, ivermectin has all but eliminated parasitic diseases like river blindness and elephantiasis, helping discoverer Satoshi Ōmura win the Nobel Prize in 2015. As far as its uses in the pandemic went, however, research was still scant. Could it really be a magic Covid-19 bullet?

Kory had been trying to make such a case, but complained to the Senate that public efforts had been stifled, because “every time we mention ivermectin, we get put in Facebook jail.” A Catch-22 seemed to be ensnaring science. With the world desperate for news about an unprecedented disaster, Silicon Valley had essentially decided to disallow discussion of a potential solution — disallow calls for more research and more study — because not enough research and study had been done. Once, people weren’t allowed to take drugs before they got FDA approval. Now, they can’t talk about them.

“I want to try to be respectful because I think the intention is correct,” Kory told the committee. “They want to cut down on misinformation, and many doctors are claiming X, Y, and Z work in this disease. The challenge is, you’re also silencing those of us who are expert, reasoned, researched, and extremely knowledgeable.”

You shouldn’t silence anybody, but that’s a different story although extremely relevant at the present time since try getting Ivermectin mentioned on Facebook or Twitter, never mind The Age or The Oz.

This entry was posted in civil society, COVID-19. Bookmark the permalink.

41 Responses to How do people take such incompetent and dishonest morons seriously?